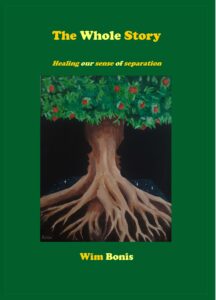 In the period November 2020 / April 2021 I have been in the process of finishing a new book, entitled The Whole Story. Healing our sense of separation. If you want to know what it is about, below you can find a brief outline of the content.

The Patriarchal Shift
We have been, and still are, confronted in our time with several crises – like a financial crisis, an identity crisis, an ecological crisis, and more recently also a corona crisis – which are in fact manifestations of a deeper, all-encompassing spiritual crisis that we have to deal with. This crisis is the result of a development in Western culture that goes back to a major shift that took place about 6000 years ago and I have called the Patriarchal Shift. Historically this period is usually considered the start of Western culture and civilization (and whatever happened before that is put under the heading of prehistory), but I am convinced (and with me, many other people)  that this tells only half the story, or even much less. Feminist researchers have appropriately called this part of the human story His Story, thereby emphasizing the fact that it has been primarily the story of men and of the predominance of masculine values. To be able to add Her Story fully to it, we have to revaluate the period of prehistory, investigate survivals of it among indigenous people and integrate them to Our Story, the whole story –  which is also a healing story.

Dual nature and dualism
Research in several fields has made it clear that by limiting the start of human culture and civilization to the period after 4000 BCE we have ignored several important elements in our human development. First we must acknowledge that we all have a dual nature: on the one hand, we are interconnected beings, who are born from and remain inextricably connected to the universe, but on the other hand we experience ourselves also as an independent subject – as an ego, a separate self – that experiences itself in opposition to the world. In other words, we are both cooperative and competitive creatures. Originally there existed a balance in our dual nature (in line with the balance of the dual character of the entire natural world, beautifully expressed by the Taoist yin-yang symbol), with the emphasis on our interconnected, cooperative side. In the period of the Patriarchal Shift a structural imbalance manifested itself in our dual nature – probably due to traumatic events that human beings were confronted with in that period, but also the shift of cultural emphasis from the image to the written word has played a role in this – an imbalance that has continued up to the present. This has truly been a paradigm change that has touched all levels of human development. The human ego – the side of ourselves that feels independent – suddenly rose to prominence and in its undeveloped state generated a deep sense of separation. Increasingly people no longer experienced themselves as being fully embedded in the natural world: they placed themselves outside and above it, and from this position tried to exert control over it. The principle of control implies a mindset of struggle: from this the dualistic worldview was born. Existing dualities, in which the two elements supplemented each other, were changed into dualisms, in which the elements were opposed to each other – like day versus night, summer versus winter, men versus women; and new dualisms were created from the sense of separation – like civilization versus barbarism, reality versus fantasy, the Fatherland versus the Motherland.

Spiritual roots
In period after the Patriarchal Shift the experience of the Sacred gradually moved from the outdoor to the indoor world: a development from what I call outdoor spirituality to indoor religions manifested itself. This means that the rise of the so-called World religions, which also include the monotheistic religions of the Judeo-Christian heritage, are no longer considered a beginning of something entirely new in the human world, as manifestations of the human discovery of the religious aspects of life. It turns out that these religions had a significant spiritual predecessor, in the form of outdoor spirituality, that goes back all the way to the dawn of humanity. To give this a place in the development of humankind, we must completely revaluate the heritage of our prehistoric ancestors. This heritage has been distorted due to the Patriarchal Shift, which has given our ancestors the negative image of ‘primitives’, ‘barbarians’, or ‘savages’, whom were also assumed to have possessed no sense of religion or spirituality. This generally accepted low status of our prehistoric ancestors has also determined  the ideas that the European colonists once had about the indigenous peoples that they came into contact with in the ‘New World, and has even managed to survive into fairly recent times.

(The loss of) contact with the Sacred dimension of life
The development from outdoor spirituality to indoor religions has shown that the sense of separation has had a profound impact on our experience of the Sacred dimension of life. When we still felt embedded in the natural world, the entire natural world – from the large body of the surrounding landscape around us to the smaller bodies of ourselves and the other living beings – obviously possessed this Sacred quality. In the Netherlands many people quite probably find it quite hard to imagine that the surrounding landscape, on which humans for centuries have left a drastic mark and in which little of no ‘wilderness has remained, once possessed – and potentially still possesses – this  Sacred, animated quality. On a more modest scale, there are of course still the forests in which people can go ‘forest bathing’, and it is a fact that even in the midst of an urban environment people still remain embedded in the context of the more-than-human world (in the words of David Abram).
Anyway, it is also a fact that in the entire Western world we have once placed ourselves on a collective scale increasingly outside the natural world and elevated ourselves above it, whereby all large and small bodies lost their Sacred quality and  reduced them to mere matter. The natural world was reduced (in the words of Thomas Berry) from ‘a communion of subjects’ to ‘a collection of objects’. In this process we largely lost contact with the heritage by which the our prehistoric ancestors once experienced their outdoor spirituality – the deeply rooted heritage that I have called the Goddess Heritage. And unfortunately through the centuries our ideas about this heritage have also become very distorted under the patriarchal rule that has lasted up to the present. Therefore telling the whole story is not a matter of telling a entirely new story to replace the old story, but of opening our heart and mind to ‘a new and ancient story’ (in the words of Charles Eisenstein).

Hierarchical organization outside nature
Another development that was generated by the Patriarchal Shift has been the creation of hierarchical organizations, which are ruled from without, top-down, by the principle of power over. As said earlier, by going through this shift we have put ourselves outside the natural world, and have reduced it to mere matter, to a collection of objects. Importantly, this has also made the (legal) idea of landownership possible. Landowners could reduce their land to potential resources that they could exploit for their own benefit. As we all know, they have done so on a large scale, eventually resulting in today’s ecological crisis and the problems of climate change. The hierarchical form of organization, the principle of power over, and the idea of landownership, also provided the basis for the formation of the nation states. From the very start they were driven by an ongoing urge of to expand their territory and to take possession of land owned by the rulers of other nation states. They were driven by abstract ideas of the Fatherland, and it has become obvious that the concrete Motherland – the surrounding landscape in which we are all embedded, the ground under our feet and the sky above us – has suffered tremendously by this approach to life. Although some populist political leaders today still continue to dream of their Fatherland and of expanding its power, fortunately more and more people also realize that we can never deal properly with the current crisis through principle of the top-down and power over – as it  has actually created the problem in the first place and is therefore very much part of the problem.

The Great Turning
Central in my book is the notion that we must first understand the impact of the Patriarchal Shift, and what has been lost due to this shift, before we can heal the spiritual crisis in our time by a new paradigm shift, which has been called the Great Turning. This Great Turning involves a reintegration of the parts of our human story that have been suppressed or ignored, so that we can finally tell the whole story, and also become part of it. In fact, by fully understanding what we have done to ourselves by going through the Patriarchal Shift in the distant past, how we have cut ourselves off from significant human experiences necessary to enable us to grow psychologically and spiritually, the energy for the Great Turning  is released spontaneously, both on an individual and collective scale, and promises to restore the inner and outer balance in our lives. It can finally make us part of an Earth Community, which includes not just ourselves but all the living beings – animals and plants – on our planet. This concept of the Earth Community is not an abstract phenomenon and does not focus our attention directly to the planetary scale, but makes us pay attention to life in our direct vicinity on a daily basis, by being open, empathic, respectful, communicative and cooperative towards other people, by treating animals and plants the best way we can– and by experiencing awe on a regular basis that remind us that we are always and everywhere embedded in much larger, natural world; in the more-than-human world. Then the following principle (that is also the motto of this website) becomes meaningful: only by fully realizing where we are, in time and in place, we get in touch with who we actually are, and always have been.

Other themes
Some other themes that I also pay attention to in this book: the changed insights with regard to the role that consciousness plays in life; the secular, materialistic worldview that still dominates in mainstream science; the importance of the relatively new insights of the scientific ‘field theories’; and  the big difference between putting emphasis on the head and the brain, and putting emphasis on the heart and the hara center.

If I must say in one sentence what my book is about: the book is really about coming home – and about the many obstacles that have prevented us from doing so.